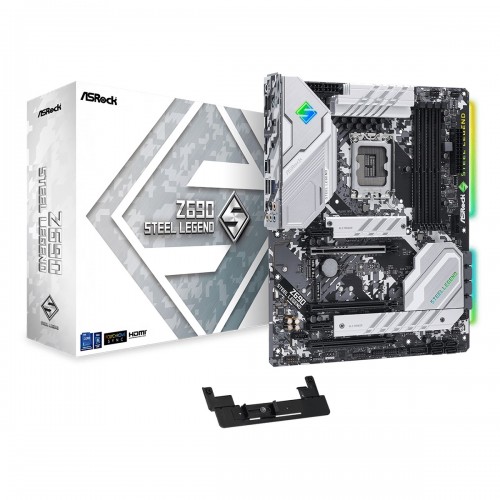 The ASRock Z690 Steel Legend Motherboard supports 12th Gen Intel Core Processors (LGA1700). It features 13 Phase Dr.MOS Power Design and it supports DDR4 5000MHz (OC) RAM. It offers a max capacity of system memory up to 128GB. It supports Intel Extreme Memory Profile (XMP) 2.0. It is ready to unleash the full potential of future high-end graphic cards. It has a blazing fast data transfer interface with a reversible USB Type-C design that fits the connector either way. USB 3.2 Gen2x2 Type-C delivers up to 20 Gbps data transfer rate which is 2x as fast as the previous generation.

The ASRock Z690 Steel Legend motherboard supports the lighting speed of the latest PCIe 5.0 standard. The latest PCI Express 5.0 is capable to perform a breathtaking bandwidth of 128GBps. It is capable of accommodating multiple M.2 storage devices, one of which can support PCI Express 4.0 M.2 SSD, it is capable of performing twice the speed compared to the previous 3rd generation, giving a lightning-fast data transferring experience. It has 4 SATA3, 2 Hyper M.2 (PCIe Gen4 x4), 1 Hyper M.2 (PCIe Gen4 x4 & SATA3).

The ASRock Z690 Steel Legend is featured with Nahimic Audio offers you the most engaging listening experience, vibrant and rich with details whether you are using headphones, a headset, external or internal speakers, via USB, Wi-Fi, analog output, or even HDMI. It is also equipped with Realtek ALC897 7.1 CH HD Audio Codec.

ASRock Z690 Steel Legend is equipped with onboard RGB headers and an addressable RGB header that allow the motherboard to be connected to compatible LED devices such as strip, CPU fans, coolers, chassis, and so on.

What is the price of ASRock Z690 Steel Legend 12th Gen Motherboard in Bangladesh?