TBA
Out Of Stock library_addAdd to Compare
1,000৳ Discount on Online Order 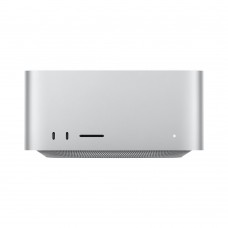 Apple Mac Studio available at the Best Price in Bangladesh

When It comes to Innovative Computers, Tablet PCs, or Portable PC the Tech Giant Apple Inc. shines. Over the year they have given us Innovative products like the Mac Mini, iPad, MacBook, iMac, Airpods, etc. Most of their products have set the gold standard in those respective categories. The Mac Studio is one of those designs that only Apple could come up with. It provides a unique combination of power and elegance. As the name implements, The Mac Studio is aimed at "studio" professionals like Graphics designers and Video Editors.

Apple has manufactured Mac Studio as a Portable mini PC. The Mac Studio resembles the Mac mini. Although the body is said to be a bit bulkier than the Intel version of Mac Mini. The Mac Studio uses Apple’s Proprietary most powerful M-series chips. The Mac Studio is available in two variants of the M1 Chipset. They are the base model with M1 Max and the Ultra model with an M1 Ultra processor. Here we will discuss how the Mac Studio stands out in different aspects ranging from design to performance.

When it comes to Design, The Mac Studio is both unique and efficient while maintaining performance. This Workstation PC comes with an SoC (System-on-a-Chip) Architecture. SoC is primarily used by Tablet PCs and smartphones. All the components including The CPU, the RAM, SSD, and the cooling Unit are Soldered into the motherboard as a Unified system. Being a cross between a Mac mini and a Mac Pro, Mac Studio is a bit taller than the older Mac mini on each side. But The Unit is small enough to fit under an Apple Studio Display. The Full body has an all-aluminum enclosure and unique thermal design. It uses the same "squircle" shape as the Mac mini, with a square-shaped design with rounded corners. The design includes a special intake and exhaust system to dissipate heat and allow for quiet operation. The Mac Studio has a series of airflow channels at the back and the bottom parts. The machine pulls in air from the bottom and pushes it out through the more than 4,000 perforations at the back and bottom of the chassis to cool the internal components. The M1 Max version has an aluminum heatsink while the M1 Ultra version has larger copper thermal modules.

Features & Performance of the Mac Studio

Both the models of Mac Studio have powerful performance. it's the M1 processors inside the Mac Studio that set it apart from the more compact Mac Mini. As mentioned, the Mac Studio is available with either an M1 Max or M1 Ultra, the latter providing a 20-core CPU, 48 or 64 GPU cores, and a 32-core Neural Engine. Rather than connect them via the motherboard; Apple has developed an on-die interconnect technology called UltraFusion, which allows macOS to simply treat the M1 Ultra as a single processor. So that any software doesn't have to rewrite its applications to utilize the M1 Ultra's twin processors. It has Two video decode engines and Four videos encode engines. So this powerful and compact workstation-class desktop can handle heavy resource-intensive Content creation, Graphics Design, and Video editing. With superior cooling performance, The Mac Studio is quiet enough even under a heavy load. The power consumption of the M1 chip is very low & saves up to 1kWh in one cycle.

For I/O ports, there are a total of 12 ports on the front and back of the Mac Studio. The back features four Thunderbolt 4 ports, a 10GB Ethernet port, two USB-A ports, one HDMI port, and a 3.5mm headphone jack that supports high-impedance headphones. There is also a built-in speaker with a headphone jack. The front of the M1 Max Mac Studio features an additional two USB-C ports along with an SDXC card slot, while the front of the M1 Ultra Mac Studio includes two Thunderbolt 4 ports and the SDXC card slot. Officially Mac Studio is sold with Apple Studio 5K Display. But it supports any USB Type C or Thunderbolt port compatible 4K Monitor. Up to four 6K Pro Display XDRs and one 4K TV or 4K display can be connected to the Mac Studio. Mac studio also supports any Apple Magic Accessories.

Buy From the best Apple Mac Shop in BD

Although there is a wide variety of PCs available for Content creation and gaming; this one is designed specifically for Content creators. Apple Mac Studio offers a truly immersive experience that no other portable PC can while rendering heavy resource-intensive tasks. But if you are wondering to get an Apple Mac Studio? You can easily get one from the Star Tech Apple Mac Studio Shop. Star Tech is the biggest laptop, computing component, Gaming accessories, Apple Macbook, iMac, Office equipment, gadgets, and camera retail and Online shop in Bangladesh since 2007 with branches in major cities like Dhaka, Chittagong, Rangpur, Gazipur, and Khulna. You can just go to any nearby Star Tech Branch for a Mac Studio of your choice. You can easily Order a Mac Studio Online from Star Tech’s official E-commerce website and get delivery anywhere in Bangladesh.