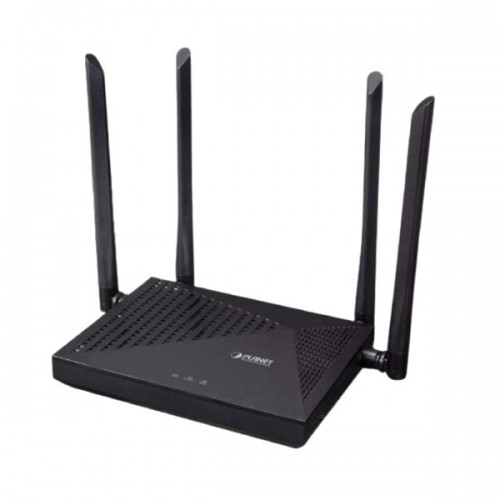 Planet WDRT-1202AC is a 1200Mbps Dual Band Gigabit Wireless Router from Planet. PLANET WDRT-1202AC Wireless Broadband Router supports IEEE 802.11a/b/g/n/ac standard, dual-band, and Gigabit LAN and WAN, allowing for simultaneous wireless speeds of 867Mbps in the 5GHz frequency band and 300Mbps in the 2.4GHz frequency band, which is 16 times faster than a traditional 11g access point. The WDRT-1202AC can provide customers with superb multimedia streaming through their mobile devices anywhere, anytime in the home and workplace, thanks to its remarkable stability of high-speed wireless transmission and better reliability. Because the 2.4GHz band has been overcrowded as more people utilize high-speed wireless connections for a growing number of wireless applications, the 5GHz band, which is currently in high demand, was created to alleviate the situation. PLANET WDRT-1202AC provides customers with a radio frequency of 5GHz for streaming HD films or playing online games, while the 2.4GHz band is utilized for surfing the Internet, to avoid wireless interference between the two bands. For you, the WDRT-1202AC is like having two completely separate access points in one device.

Improving communication speed is one of the major requirements of today's Gigabit local area networks. With throughput up to 10 times faster than the existing 100Mbps solution, the WDRT-1202AC fully employs the full functionality of the 802.11ac wireless standards, eliminating the bottleneck of the transmission speed of the megabit wired type. Using the WDRT-1202AC to connect your desktop, NAS, media player, and game console guarantees extremely high throughput and excellent signal quality.

The WDRT-1202AC supports the NAT function allowing multiple users to access the Internet via a single legal IP.  It also provides Port Forwarding for the specific LAN PC to act as an application server and offer certain services to the clients on the Internet. In addition, the powerful firewall protects your Intranet clients from unauthorized access and various kinds of DoS attacks from the Internet. The WDRT-1202AC with MAC-based access control allows or denies wireless client connections to prevent possible hackers attack. Planet WDRT-1202AC 1200Mbps Dual Band Gigabit Wireless Router offers 1 year of Warranty.

What is the price of Planet WDRT-1202AC 1200Mbps Dual Band Gigabit Router in Bangladesh?