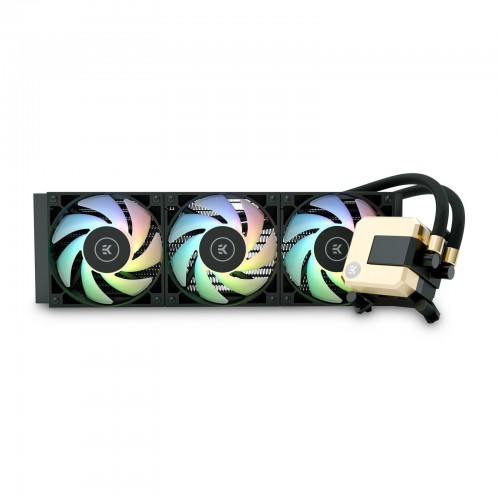 The EKWB EK-AIO Elite Aurum 360 D-RGB is an all-in-one liquid cooling solution for your CPU, boasting a six-fan setup for even better cooling performance. This Special Edition AIO is dressed in a glossy finish, featuring a golden nickel plated pump cover and diamond-cut gold fittings. It comes with fully customizable D-RGB lighting. It offers all the benefits of a water-cooling solution in a compact, easy to install, and maintenance-free design. It comes with a universally compatible CPU water-block, along with a pre-filled pump-res combo design for a liquid cooling solution thatâ€™s ready to go straight out of the box. It is featured with a universally compatible CPU water-block, fitting all the latest Intel & AMD CPU sockets. It is supported with Intel Sockets LGA: 1150, 1151, 1155, 1156, 1200, 2011, 2011-3, 2066, 1200, and AMD AM4 Socket. The EK AIO Elite Aurum offers compatibility with almost all modern case designs.

You can customize your EKWB EK-AIO Elite Aurum 360 D-RGB to match your setup with its range of fully addressable D-RGB lighting effects. Built into both its CPU block and six Vardar S fans, the EK AIO Elite Aurum offers a range of color configurations controlled from either your motherboard or standalone D-RGB controller. The Golden Nickel cover of the pump with a hint of D-RGB peeking through the EK logo is just one of the cool features of this Limited Edition EK-AIO. It is compatible with popular RGB sync technologies from all major motherboard manufacturers.

EKWB EK-AIO Elite Aurum 360 D-RGB comes pre-installed with reinforced and sleeved rubber tubing, each fitted with an aluminum cover to ensure theyâ€™re ultra-durable. Its diamond-cut rotary golden nickel fittings allow for easy installation and adjustment of the rubber tubing, featuring a full range of movement to make the EK AIO suitable for installation in even the tightest spaces.

The EKWB EK-AIO Elite Aurum 360 D-RGB features six EK-Vardar S fans. These are industrial-grade high-static PWM fans, designed and built primarily for high-performance liquid cooling systems. The EK Vardar can be adjusted to run at speeds between 550 - 2200RPM for either high airflow or silent running.

What is the price of EKWB EK-AIO Elite Aurum 360 D-RGB CPU Cooler in Bangladesh?