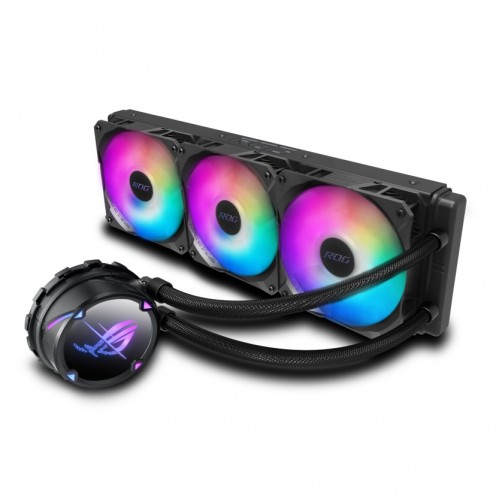 The ROG Strix LC II 360 ARGB AIO provides high-performance CPU liquid cooling while maintaining a clean, contemporary appearance. The cooler, which has a closed-loop design and ARGB radiator fans, unlocks the full capability of an Intel or AMD CPU while also enhancing your build with spectacular multi-color lighting effects. Strix LC II 360 ARGB, with the cooling you expect from ROG, is ready to become a crucial part of your setup and light it up with your flair.

ROG Strix LC II 360 ARGB's intricate new designs emphasize the classic ROG style, and every element reflects the Strix spirit. You can synchronize lighting effects with ROG build components and show off your style with Aura Sync compatibility on the pump cover's new lighted ROG logo and ARGB radiator fans. Furthermore, the carved ROG inscription on the radiator's side compliments the iridescent lettering on each fan's hub.

The ROG Strix LC II series has the most recent cooling-plate design. The plate, which is made of pure copper, has an array of small micro-channels that minimize thermal resistance and increase surface area, resulting in lower CPU temperatures.

When the CPU is idling or under light demand, PWM management allows both the pump and radiator fans to operate at slower rates, reducing noise levels.

The ROG Strix LC II series is compatible with a broad selection of Intel and AMD motherboard platforms, allowing you to connect it with your preferred processor. Radiator installation in a variety of chassis is equally as adaptable with 380mm of tubing at your disposal. The Asus ROG STRIX LC II ARGB 360MM CPU Cooler comes with a 06-years warranty.

What is the price of Asus ROG STRIX LC II ARGB 360MM CPU Cooler in Bangladesh?