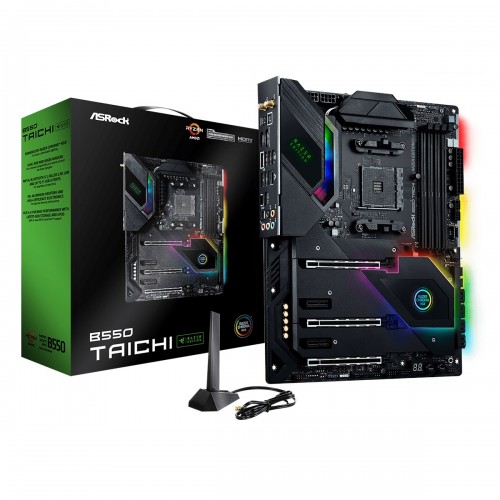 ASRock B550 Taichi Razer Edition Motherboard The COOLEST flagship motherboard, that stands out for its incredible OC performance and premium specification. Here comes the new version, Taichi - Razer Edition, which is the world’s first motherboard natively integrated with Razer Chroma RGB lighting. It is the ultimate control center for all things Chroma RGB and enables universal compatibility with thousands of ARGB components directly into the ecosystem. It supports Dual M.2(22110) For SSD. Besides the onboard LAN port, users may also choose 802.11ac wireless connections by M.2 (Key E) slot. The Sound Tracker is the visual indicator that points out the directions from which predominant sounds are coming. Each sound is properly positioned at 360° on a radar for a full immersion during the game. Whether the user is using headphones, a headset, external or internal speakers, via USB, Wi-Fi, analog output, or even HDMI, Nahimic Audio offers users the most engaging listening experience, vibrant and rich with details. This motherboard features onboard RGB headers and an addressable RGB header that permits the motherboard to be connected to compatible LED devices such as strip, CPU fans, coolers, chassis, and many more. An easy troubleshooting tool that shows the CPU / DRAM / VGA / BOOT operation every time you start up the system. Post Status Checker is a fast and easy way to identify the source of the problem. Extra-large aluminum alloy heat sinks that effectively take away heat from the MOSFET and chipset so that the user's whole system may perform more stable. Also, 2oz Copper PCB delivers lower temperature and higher energy efficiency for overclocking. High-Density Glass Fabric PCB design that diminishes the gaps between the PCB layers to protect the motherboard from electrical shorts caused by humidity. Packed with a D-Sub + DisplayPort + HDMI combo. Plus the HDMI port supports 4K resolution. Some sensitive digital components on the motherboard are vulnerable to power surges, the excessive current may cause the system to malfunction immediately. ASRock Full Spike Protection includes various technologies to prevent motherboard components from being damaged by these unexpected voltage spikes. ASRock Live Update & APP Shop is designed for user convenience. Provides various apps and support software for users to download. This exclusive ASRock Motherboard comes with 03 years of warranty.

What is the price of ASRock B550 Taichi Razer Edition Motherboard in Bangladesh?