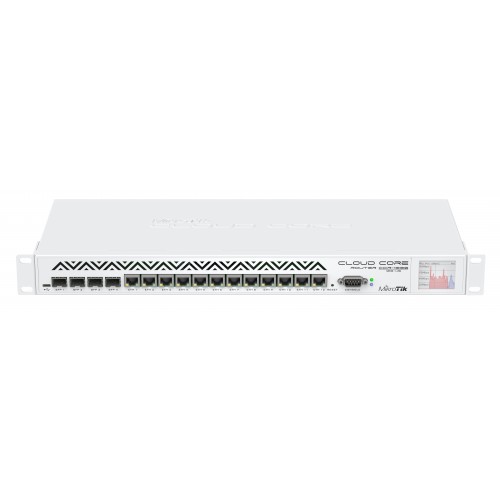 CCR1036-12G-4S is an carrier grade router with a cutting edge 36 core Tilera CPU! Unprecedented power and unbeatable performance - this is our new flagship device. Over 20 times faster than our previous top model, the Cloud Core supports throughput of up to 24 million packets per second, or up to 8 gigabits - full wire speed.

It has two SODIMM slots, by default it is shipped with 4GB of RAM, but has no memory limit in RouterOS, so will accept and utilize 8GB or more. It comes with power supply and 1U rackmount case.

The cloud core router is powered by RouterOS, a fully featured routing operating system which has been continuously improved for fifteen years. Dynamic routing, hotspot, firewall, MPLS, VPN, advanced quality of service, load balancing and bonding, real-time configuration and monitoring - just a few of the vast number of features supported by RouterOS.