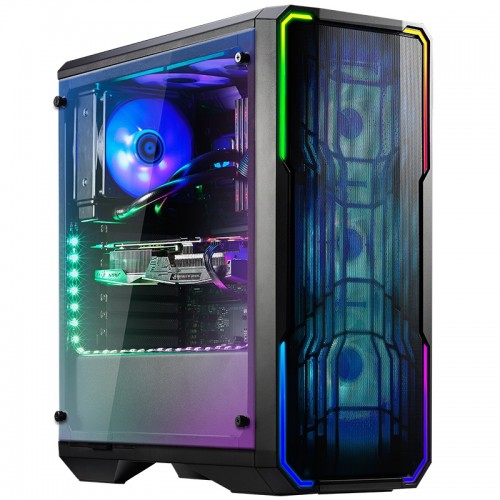 BitFenix ENSO MESH Gaming Case is build with a perfectly organized interior structure and a sleek exterior design. It is complemented by a 4mm see-through-tinted tempered glass panel on the side and addressable RGB illumination surrounding the High density mesh front. In this casing, addressable RGB lighting allows multiple LED colors in one zone instead of one static color at a time. It is powered by a built in controller which is compatible to both, BitFenix Alchemy 2.0, static, and BitFenix 3.0, addressable, RGB products and offering single colors to match different system builds, but also featuring different rainbow modes. In this ENSO MESH case, The RGB illumination supports the latest ASUS AURA Sync 3 pin addressable RGB motherboards, currently found in high-end segment. It enables users to coordinate multiple color lighting on different devices, including the all new Alchemy 3.0 addressable RGB strip, all controlled and synchronized by the ASUS AURA software bundled with Asus AURA SYNC 3 pin motherboards. This exclusive case comes with a high-quality tempered glass side panel with a strength of 4mm and it's tempered glass panel is see-through-tinted, allowing a peak into the case showing off the now often RGB illuminated main components. The gaming case comes with PSU and up to two HDDs beneath it, while three SSDs can be attached to the back of the motherboard tray, showing only the motherboard, graphics cards and the cooling solution through the tempered glass panel. The 23mm cable management space behind motherboard tray makes it an easy job to manage the cables clean. With the drive-trays out of the way, the ENSO MESH provides plenty of space for graphics cards with a length up to 340mm and supports up to two 140mm fans or a 280mm or a 360mm radiator in the front while a 120mm rear-fan or radiator at the rear and up to two 120mm fans in the top will push the hot air out and also supports up to 160mm high CPU air cooler with good gaming experiance.

What is the price of BitFenix ENSO MESH Gaming Case in Bangladesh?