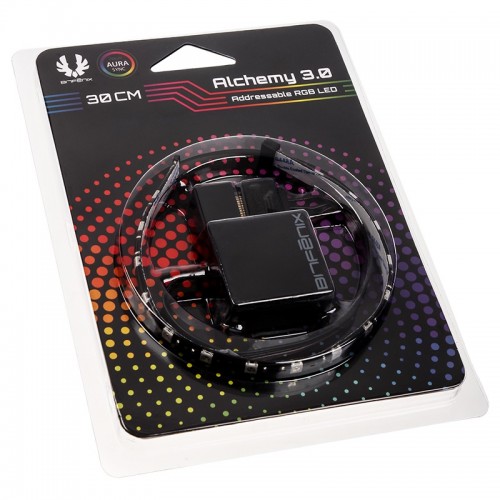 The BitFenix Alchemy 3.0 Addressable RGB LED Strip takes PC DIY illumination to the next level with addressable RGBs, increasing lighting possibilities with multiple colors on one strip. Being an upgrade from the Alchemy 2.0 Magnetic RGB LED Strips, the latest version comes with the high build quality and durability our users are accustomed to, modders and gamers alike.

Modular Design & Convenient Installation The Addressable RGB LED Strips are delivered with 70cm long cables and modular components, assuring clean cable management and easy cable routing. Further, the LED Strip and the optional controller are equipped with high-quality magnets, allowing easy installation and relocation around all metal panels in the chassis. The 3M adhesive strip can be used for firm mounting on most flat surfaces.

Pre-programmed Controller The Alchemy 3.0 Addressable RGB Strips can be purchased with an optional controller, pre-programmed with several single-color modes to match the most popular system colors and three multi-color rainbow modes. The controller comes with a switch with and extended cable for convenient positioning and a magnet for easy installation.